On the anniversary of 8th November 2020, when  Shusha, the symbol city of Karabakh and the cultural capital of the Turkic world, become free, the celebration ceremony,  which was organized by Gazi University at the Rectorate Mimar Kemalettin Hall, attracted a great deal of attention.

The celebration ceremony, which started with a moment of respect and the singing of national anthems, continued with the screening of a short film prepared in memory of the Karabakh Victory. After the film screening, Our Rector Prof. Dr. Musa Yıldız made the opening speech and stated the following:

“Today, on November 8, we celebrate our great victory over the Armenian forces, whose cruelty we have been fighting for many years. We have introduced the existence of the Turkish union, the force of the Turk, the charactericty of the Turk to the whole world. As it has been done for centuries, the Turkish Nation is going to be known for being united in protecting their homeland. Hereby, I wish God's mercy to all our Turkish brothers who were martyred in the Karabakh War and the genocides before them and I pray that our star and crescent Azerbaijani flag will fly forever in our homeland.

Prof Dr. Cafer Caferov, who is Rector of Azerbaijan State Pedagogical University, expressed his happiness to be at Gazi University for the purpose of the celebration ceremony organized in memory of the victory.  Additionally, he stated that  "The State of the Republic of Turkiye and the Turkish people have always been on the side of Azerbaijan. This is the strength of our unity and brotherhood, that we are always there for each other. We, together with Gazi University, will act jointly to prepare young people for the future in the most beautiful way. As Gazi Mustafa Kemal Atatürk said, ‘The merriment of Azerbaijan is our merriment, the sorrow is our sorrow.’ This is the celebration of both us and our sister Türkiye”

Ambassador of the Republic of Azerbaijan to Ankara Reşad Memmedov stated in his speech that “November 8 Victory Day is not only the holiday of the Azerbaijani public, it is the common victory of the entire Turkic world. This war was not only the war of Azerbaijan, it was the war of everyone who felt Turkish all over the world.

After the opening speeches, a conference was given by the academicians about the historical and cultural monuments that have been destroyed by the Armenians during the occupation years in Shusha and about the results of the Karabakh Victory. Gazi University TURKDAM Director Prof. Dr. Alev Çakmakoğlu Kuru shared information on the  "Traces of the years of Occupation in  Azad Susha,  Cultural Capital of the Turkic World". On the other hand, Vice Rector of Azerbaijan State Pedagogical University Assoc. Prof. Eldar Aslanov gave information on "Homeland War and Results".

Performer Ahmet Şafak told the story of the Karabakh Composition, which Gazi University included in all its activities for Karabakh and Khojaly for 28 years. The artist Ahmet Şafak, who participated in the ceremony online, gave emotional messages to the audience by performing the Karabakh song.

Azerbaijan State Pedagogical University, Gazi University Faculty of Fine Arts Department of Music Education , Gazi Education Faculty, Department of Music Education Faculty members performed jointly in the music recital called “Our Common Voice, The Black Sea were fluttering ”   and gave participants emotional moments. After the music recital, Gazi University Rector Prof Dr. Musa Yıldız represented a plaque to  Ambassador Reşad Memmedov, Education Counsellor Prof.Dr. Necibe Nesibova, Rector Prof.Dr. Cafer Caferov, Vice Rector Assoc.Prof.Dr. EldarAslanov and Prof.Dr. Türker Eroğlu, who is Lecturer at Gazi Education Faculty Department of Fine Arts Education. At the end of the ceremony, an exhibition of poems by Mahire Hüseynova and photographs of the Karabakh Victory, organised in front of the Gazi University Rectorate building, was visited by all the participants. The exhibition, where the inscription of the ”Karabakh Tree" was located, finalized with commemorative photographs that were taken collectively. 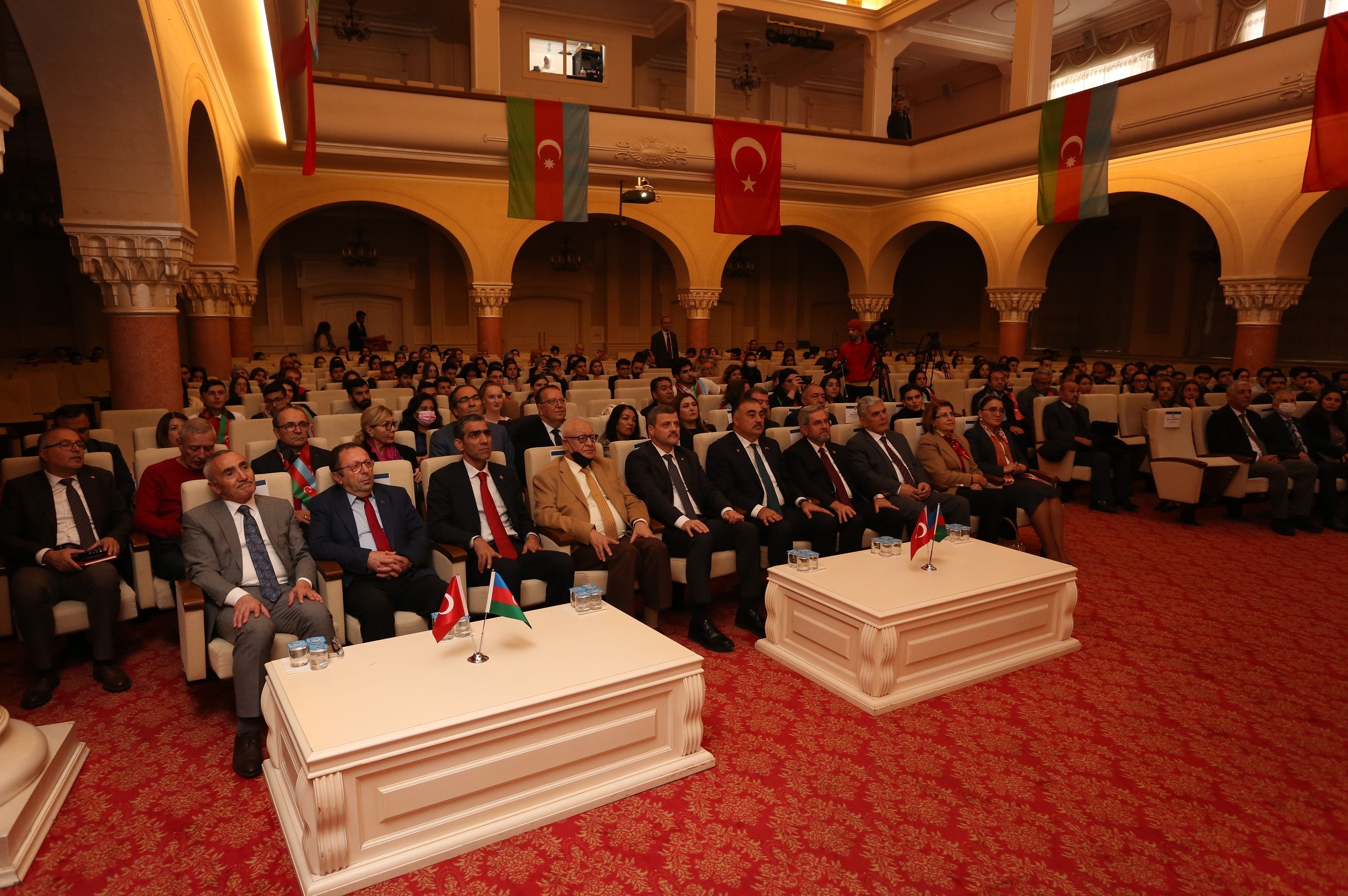 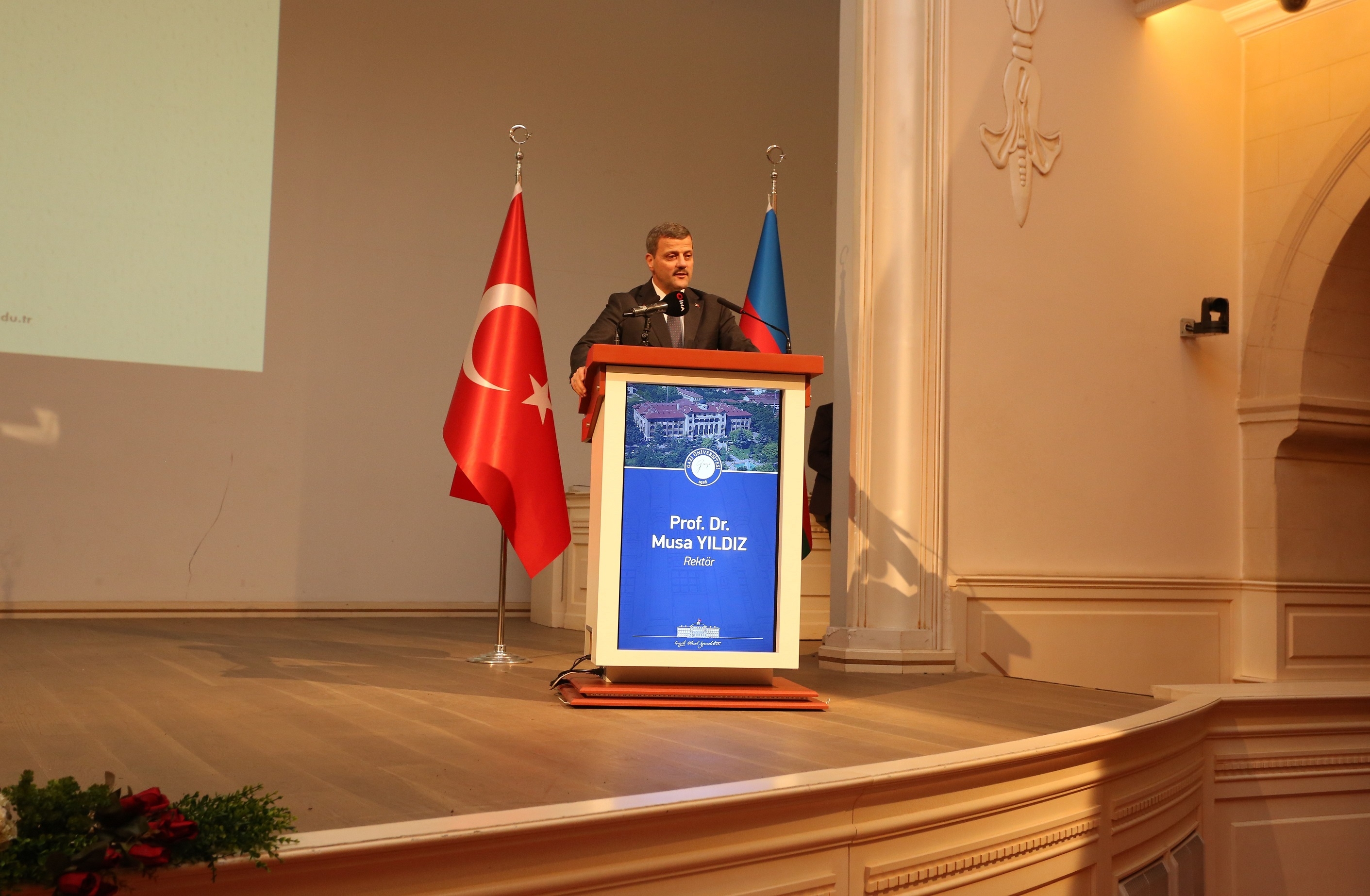 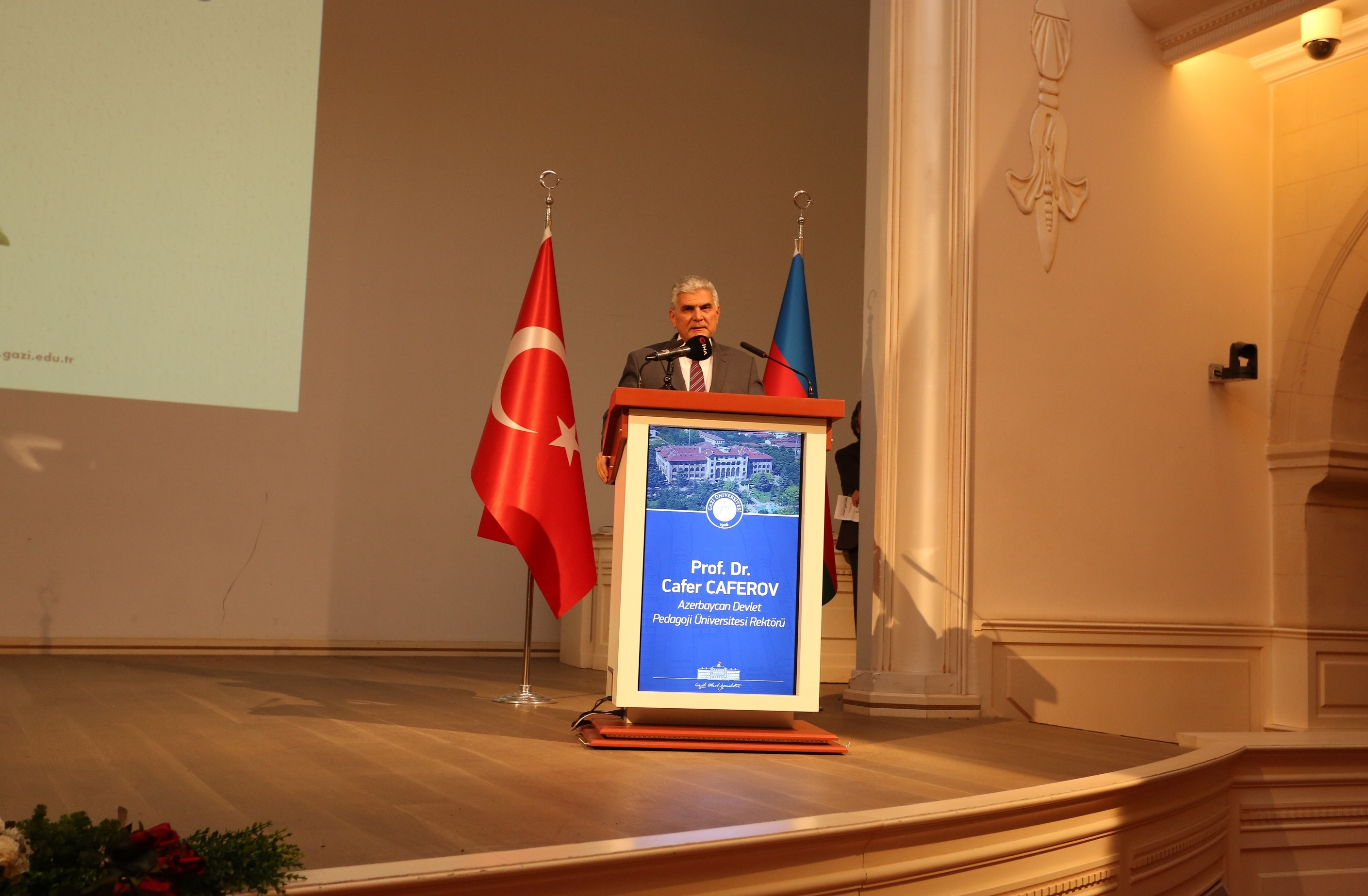 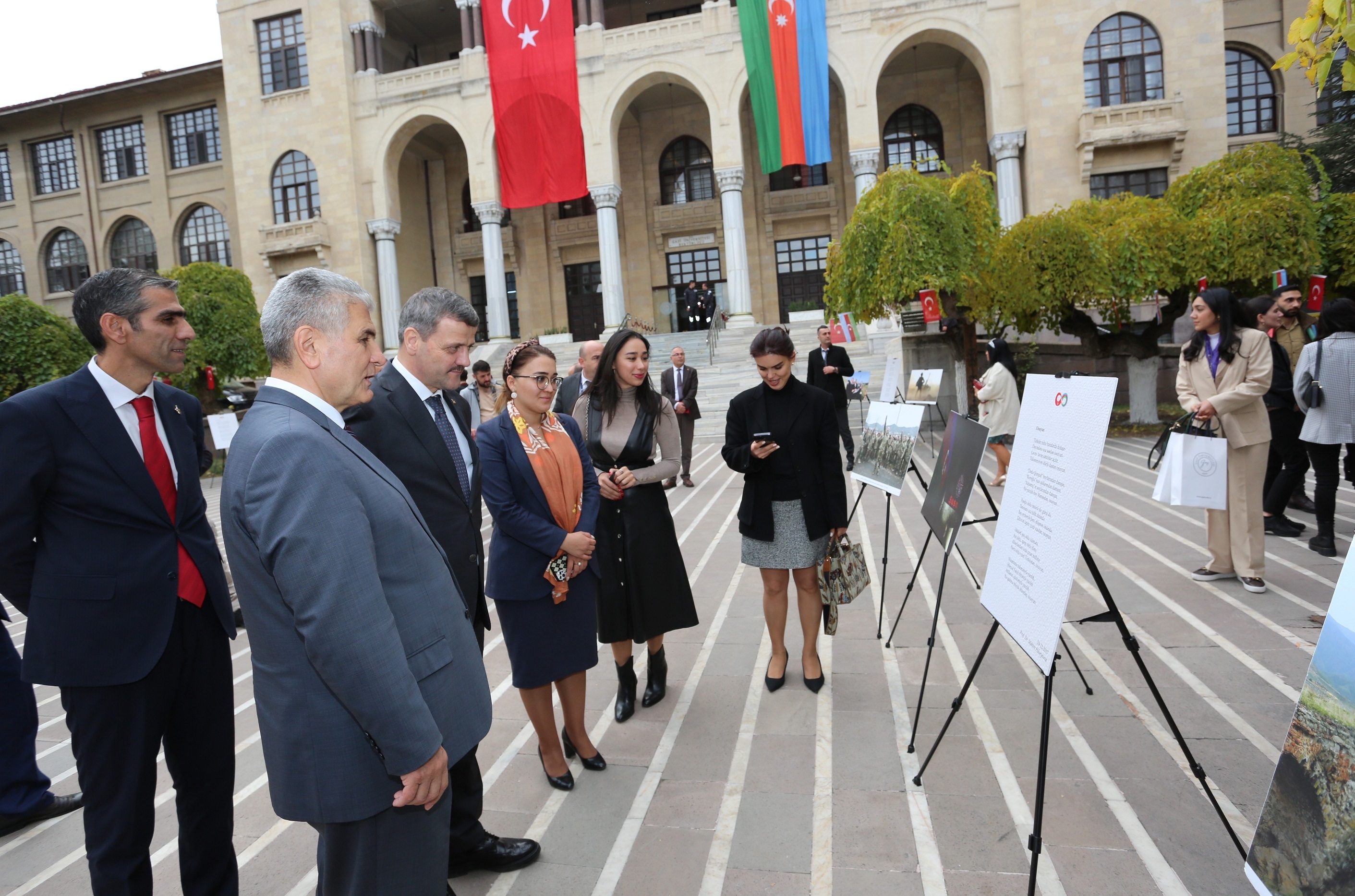 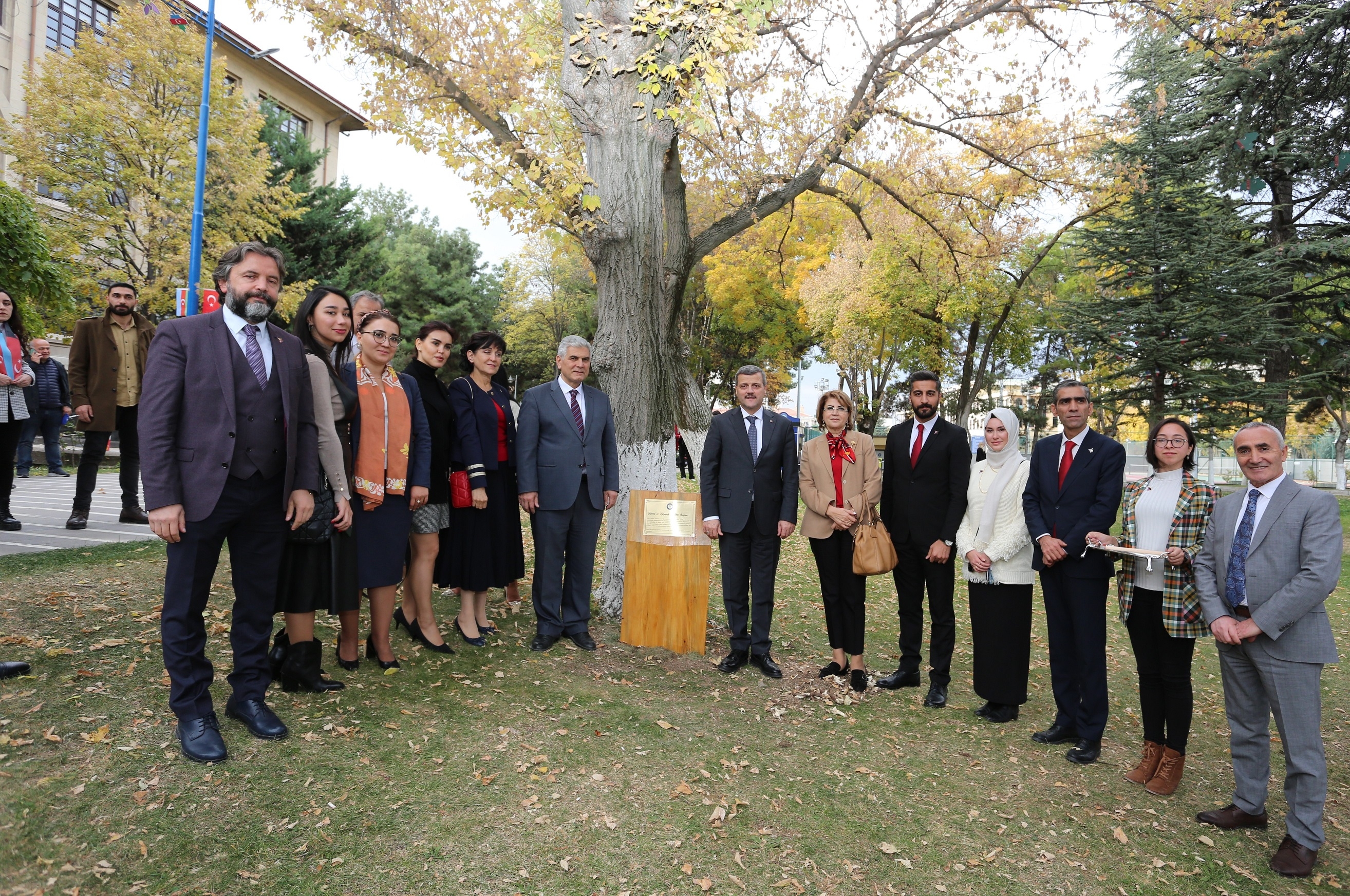 Send us your opinions, requests and evaluations.